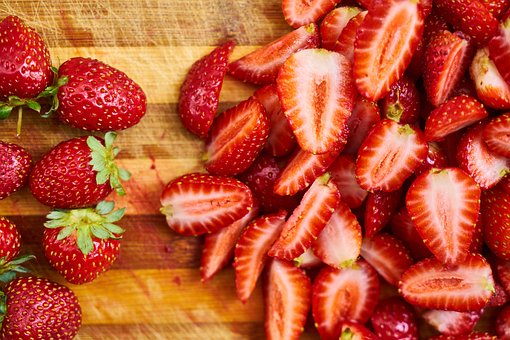 Strawberries grew wild for centuries and were enjoyed by many Europeans, although much smaller in dimension than we have today. Like so many other fruits valued initially as medicinal and mentioned in ancient Roman writings, they’re depicted in oil paintings during the 15th century by Renaissance artists (a little snacking on the side, possibly?) . Appears they were consumed as a panacea to depression (who can feel blue once you have sweet berries to nosh on?) .

Gathered from the forests by early colonists, foodie president Thomas Jefferson experimented with different varieties in his vast gardens as early as 1789, serving them up at grand dinners to the joy of his guests. His frustration was that the small size at that time, still a strain of the Alpine variety which he brought home from France. Luckily, horticulturists and growers continued to work on producing a larger size and of course were finally successful.

But Americans aren’t the only country which cherishes this beautiful red fruit. In Italy, strawberries are a favorite gelato flavor. The Greeks prefer to dip them in sugar, then roll them in brandy. Japan still experiments with dozens of varieties, which were initially very expensive and available only for royalty. Throughout the 1930s, their production was increased dramatically, and they now rank as one of the best growers in the world.

Obviously, America’s love affair with the strawberry is legendary, as we far surpass any other nation in production and use, cranking out 1.5 million tons a year, a third of the entire world’s production. Translating into just over 9 lbs per American in consumption, here’s what tops the U.S. hit parade:

Shortcake – with biscuits or sponge cake, topped with whipped cream, a classic

Pie – either fresh (with a sugar glaze) or baked, often with rhubarb

Yogurt – fruit on the bottom or mixed

Fresh – by themselves, sliced and sugared or as a topping

Sliced – on breakfast cereal and pancakes

Hardy and easy to grow, the plants also make an attractive ground cover, even though neighborhood creatures like to sneak into backyards and devour the fruit once the coast is clear. They also freeze well and can be appreciated year-round.

If you are fortunate to live in a region where strawberries are grown, an enjoyable outing is visiting a”pick your own” area, though it’s tiring under a hot sun and puts a strain on the back, worth doing once (and all you can eat in the procedure ). So make it a point to pick up a quart or two on your next visit to the local supermarket or farmers market. The best ones are fresh, ripe and flavorful.